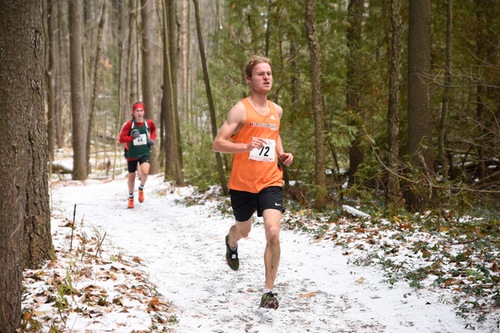 The third-year runner dominated the OCAA cross country circuit last autumn, winning four consecutive races, including provincials. His season began at the Fanshawe Conservation Area in London, Ont., in September, winning in a eight kilometre time of 26:25, fifty-five seconds ahead of his closest competitor.

Two weeks later at Seneca College in King City, Ont., Rooke was first to cross the finish line again in a time of 27:53, twenty-nine seconds in front of the second-place finisher. He followed this up with a third victory, this time at the Ashtonbee Park Reservoir in Toronto, winning in a time of 26:50, just over 11 seconds ahead of his closest rival.

Rooke was clearly the favourite heading into the 2018 OCAA Cross Country Championships at the University of Toronto Scarborough campus field and he did not disappoint, winning in a time of 26:45, just under fourteen seconds ahead of the silver medalist. It marked Rooke's first career OCAA medal, and he was named to the OCAA All-Ontario First-Team after achieving second-team status in 2016.

Rooke then returned to Seneca College in King City, Ont., for the Canadian Collegiate Athletic Association (CCAA) Cross-Country National Championships. He finished seventh in the nation in a time of 28:27 and was named a CCAA All-Canadian for his efforts.

He was also named Mohawk's Most Valuable Player for cross country and its Outstanding Male Athlete of the Year.

"Kyle has had an exceptional year winning every college race he competed in and improving his time over last year significantly," praised Michelle Ball, Mohawk's Associate Director and Student Life and Athletics Director. "Kyle is not only a talented runner, but also a true team player. Kyle supports all his teammates and celebrates their success as much as his own."

Rooke becomes the sixth student-athlete from Mohawk to be awarded OCAA Male Athlete of the Year, and only the second men's cross country runner in the history of the award dating back to 1997.

Rooke will be recognized for his remarkable season at the ninth biennial OCAA Hall of Fame ceremony, to be held at the Holiday Inn Toronto International Airport in Toronto on Wednesday, May 8.

The OCAA will announce its 2018-19 OCAA Female Athlete of the Year on Wednesday.