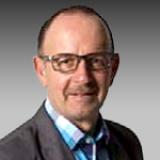 Brian has over 35 years experience in television production in both Canada & the United States.

Brian has received several awards for his work as a producer/director, cameraman and editor. His attention to detail and creative vision has attracted major media outlets throughout North America including NBC, CBS and CNN.

In 2005, Brian joined the team at Mohawk College as a professor in the Media and Entertainment department and still works on a freelance basis in the television industry. Recently, Brian received both the Award of Excellence & President's Award for his work at the college.

Brian is an alumnus of the Television program.