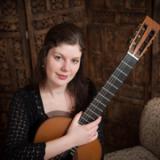 Over the past decade, Emma Rush has established herself as one of Canada’s preeminent classical guitarists. Known for her innovative programming and powerful stage presence, along with her warm sound and virtuosic technique, an event with Emma Rush is one to remember.

Emma Rush’s career has commanded world recognition. Recent touring highlights include a four-city tour in China, starting with the Altamira Shanghai International Guitar Festival, appearances at major guitar festivals including Festival de Guitarras Lagos de Moreno (Mexico), the Nyköping Gitaarseminarium (Sweden), and a prestigious concert at the Internationales Gitarren Symposion, Iserlohn (Germany). She tours throughout North America and in 2016-17 toured extensively in Eastern Canada as a Debut Atlantic artist. She performs regularly as Azuline Duo with flutist Sara Traficante and in 2018-19 the duo toured throughout Western Canada in the Yukon, British Columbia, and Alberta. Rush recently appeared in the McMichael Gallery’s Group of Seven Guitar Project documentary alongside such notable guitarists as Bruce Cockburn, Jesse Cook, and Don Ross. In 2018 Rush completed two residencies at the Sointula Art Shed in British Columbia and in Lübeck, Germany.

She has received three City of Hamilton Arts Awards, and has had her work supported by the Canada Council for the Arts, Ontario Arts Council, Hamilton City Enrichment Fund, and FACTOR.

In 2020 Rush released Wake the Sigh, a collection of rare music written for guitar by women in the 19th century.  Her earlier recordings are Canadiana, which includes a suite dedicated to her by composer William Beauvais, and Folklórica.

“Rush’s technique is flawless throughout...” The Whole Note

Rush is an instructor at Mohawk College in Hamilton. She has been a guest lecturer at colleges and universities throughout North America and was an Artist-in-Residence at the Fountain School of Performing Arts at Dalhousie University in the fall of 2016.

Rush has been active in presenting guitar events around the world and is currently an artistic producer with the Collegiate Peaks Guitar Retreat in Colorado.