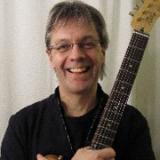 Crammed in a mini-van with three other guys for weeks on end, a drum kit, amps, suitcases, guitars, bags of food. One nighters. You played a bar the night before, finally packin' it in way late. You’re up early, driving through the Rocky Mountains from Revelstoke to Banff in a monster February blizzard, one big whiteout, to make an afternoon soundcheck. All part and parcel of a working day for a musician in a country 9.9 million sq. km. large with a population slightly greater than Morocco.

Toronto based guitarist (Edmonton native) Kim Ratcliffe is known for covering a wide variety of creative endeavours and musical worlds. He has been involved with music, primarily on a professional level, for close to 35 years, (the path has had a few curves, alternate routes and snowstorms to deal with) performing, touring, writing, recording and teaching.

Starting in his teens, Kim was into rock/blues/pop, then discovered jazz, and also was developing interests in chamber/classical music. Recently Kim has been leading his own jazz quartet, Rat4, with Pat Collins (b), Ted Warren (dr) & Jim Lewis (tr), and is a member of the Walrus Guitar Quartet, with David Occhipinti, Ted Quinlan and Roddy Ellias. He’s played in groups led by Bruce Cassidy, Frank Lozano, Paul Delong, and others, and can still occasionally be found stomping on a distortion pedal in a formerly smoky bar somewhere.

His theatre experience includes being a member of the pit bands for 'Chicago' at the Canon, 'Hairspray' at the Princess of Wales, 'The Full Monty' in Belleville, 'Rent' for Theatre Sheridan, Christmas Panto at the Canon,'Stan Rogers, A Matter of Heart' in Charlottetown, ‘Outrageous’ at CanStage and many others, including subbing on 'Dirty Dancing' and 'The Boys in the Photograph' at the Royal Alex, 'Joseph' at the Canon.

Kim started to play the guitar in Edmonton, inspired by the Beatles and his uncle Bill Pisarchuk, who would bring his guitar to the house and sing rockabilly and country tunes. Kim had Gillaume Barre Syndrome when he was seven, and his parents encouraged him to start playing the guitar a couple years later partly as a way to help with his ongoing recovery at the time. As a teenager in Victoria, he took lessons with Norm Winquist, started playing guitar in rock bands at Mount Doug High, and received mentoring from Dave Keen and Paul Horn, two very big influences, discovering jazz. He studied classical guitar with Bruce Domoney, Ben Heywood, and Henri Dorigny and Ako Ito. There was a very good music scene in Victoria at the time with many fine players, and he was soon playing six nights a week in bar bands. He moved to Toronto in 1976, and attended York University, where he studied with John Gittens, David Mott, Trichy Sankaran, James Tenney, the great faculty there, and with Freddie Stone.

Kim has for some time been on the guitar faculties in the Jazz Programs at Humber College and Mohawk College, and is a dedicated educator. Kim has also taught at the Humber Summer Jazz Workshop, the Ottawa Jazzworks Jazz Camp, the Humber Community Music Program, Dave Snider Music, Crescent Boys School, and been involved in projects for Sheridan College for many years. He has a B.F.A. from York University (Reginald Godden Award for Academic Achievement), and received a Duke of Edinburgh Award from Prince Phillip when he was 13, (he's not sure why). In previous lives he has also worked for an arts related consulting firm, been a tree planter, a bicycle courier, lived in a zen centre, and practiced Uechi Ryu Karate.