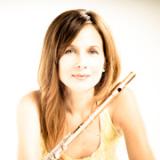 Leslie Newman made her professional debut at the age of eighteen with the Toronto Symphony Orchestra, performing Carl Nielsen’s Flute Concerto under the baton of Sir Andrew Davis. She was subsequently featured as soloist with the Toronto Symphony at the Calgary Winter Olympics Arts Festival in Jack Singer Hall. Following graduate studies Leslie settled in England where, in the space of a few short years, she presented solo BBC Radio broadcasts from almost every major centre, including three performances from the world-famous Wigmore Hall. Since her return to Canada, Leslie has presented recitals across the country, with numerous national and regional CBC broadcasts, at the Phillips Collection in Washington D.C., the Dame Myra Hess Concert Series in Chicago, Taipei’s National Concert Hall and the National Museum in Bogotá, Colombia, as well as touring Canada with Debut Atlantic and Jeunesses Musicales. She has been soloist with the Manitoba Chamber Orchestra, Oregon Bach Festival Orchestra, Edmonton Symphony Orchestra, Sinfonia Toronto, Kitchener-Waterloo Symphony and the Montreal Chamber Orchestra. Her performance of Carl Nielsen’s Flute Concerto with James Sommerville and the Hamilton Philharmonic Orchestra was described by the Hamilton Spectator as, “Simply superb music-making…” and chosen as its favourite performance of 2010.

Leslie’s performances have been broadcast by radio and television stations in Europe and North America.  Her debut CD, Beyond the Iron Curtain, released by CALA/United, was described by Gramophone Magazine as an “…immensely worthwhile contribution to the catalogue.”  Her second solo CD, Opera Fantaisie, was described as “…faultless, perhaps even definitive readings of repertoire from the ‘golden age of the flute’” (Wholenote Magazine).

As guest Principal Flautist, Leslie has performed with the Hallé Orchestra, the Bournemouth Symphony and the BBC National Orchestra of Wales.  She has toured through Brazil, Argentina, Japan, Europe and the U.S. with Sir Simon Rattle and the City of Birmingham Symphony Orchestra.  Festival appearances include Banff, Belle-Ile (France), Bogotá, Ottawa’s Chamberfest, Salzburg, Sorrento, the Stratford International Flute Festival (UK) and the Oregon Bach Festival.

At the age of seventeen, Leslie won First Prize in the Canadian National Competitive Festival of Music.  Following the completion of her Bachelor of Music degree at the University of Toronto, she was awarded a Canada Council Grant to study with the legendary Thomas Nyfenger at Yale University.  While still a student at Yale, Leslie won Top Prize in the woodwind category of the Canadian Broadcasting Corporation’s National Young Performers’ Competition.  Upon completion of her Master’s degree at Yale University, where she was named Outstanding Performance Major, Leslie moved to New York where she continued her studies with Julius Baker at the renowned Juilliard School.