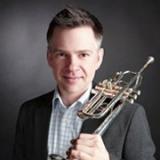 Michael Fedyshyn holds the position of Principal Trumpet with the Hamilton Philharmonic Orchestra, and can be heard regularly in concerts with the Toronto Symphony Orchestra, National Arts Centre Orchestra, and the Canadian Opera Company, as well as Esprit Orchestra, G27, and the Hannaford Street Silver Band. Other performances have included concerts with the Montreal and Winnipeg Symphonies, as well as ScotiaFest, the Ottawa Chamber Music Festival, and the Canadian Brass. While primarily an orchestral player, Michael’s solo playing has been described as being “delivered with style and care” and possessing a “haunting” quality (Hamilton Spectator, Toronto Star). When featured recently in a run of "Beckett, Feck It", he was lauded as being "rock-steady" (J.Terauds), and "nimble, and playing beautifully" (L.Slotkin).

Recent recordings include "From Russia with Brass"(2005) with Capital BrassWorks, Owen Pallett's "Heartland"(2009), Shostakovich 7th with the Toronto Symphony (2010), and "Brahms on Brass"with the Canadian Brass(2011).

A student of Robert Oades, Vincent Cichowicz, and Andrew McCandless, Michael Fedyshyn began playing the trumpet at the age of 12, in an elementary band room in Cornwall, Ontario. A graduate of the University of Ottawa and an alumnus of the National Youth Orchestra of Canada, as well as the National Academy Orchestra, Michael was invited to play in the inaugural summer season of Helmut Rilling’s FestivalEnsemble in Stuttgart, Germany, while finishing his studies at the Glenn Gould School of the RCM.