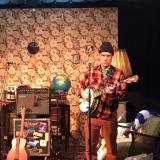 For Tim Posgate playing music has always been about being in a band with his friends. 35 years into his musical journey he continues to choose career paths that are unique and full of new challenges.

Soon after being nominated as best jazz guitarist in Canada (National Jazz Awards), the 5-string banjo became central to his musical life. Before long, he was recording and touring internationally with So Long Seven and Ronley Teper and the Lipliners. Now, you are likely to hear his fiddle playing or even the sounds of a mandolin escaping the windows of his home studio.

After receiving an honours degree in jazz performance at York University and attending the Banff School of the Arts his career as a recording artist, bandleader and touring musician took off with the release of his debut CD Hoser City. Numerous tours across Canada supporting his recordings as a leader led to the eventual culmination of the Tim Posgate Hornband featuring Howard Johnson. Playing with this legendary tuba player (the Band, John Lennon, Taj Mahal..) garnered international music festival invitations including Sweden, Finland and the U.S.

Since raising two kids with his wife at their downtown Toronto home, Posgate has become a busy sideman. He can be found playing in many groups with his musical pals including Rob Clutton’s Cluttertones, the bass/banjo duo with Andrew Downing and Collette Savard and the Savants and regular tours in Europe with Ronley Teper and the Lipliners.

Posgate is also highly respected as a private music teacher (most recently joining the faculty at Mohawk College teaching banjo and guitar). One of his most loved and critically acclaimed CDs was Banjo Hockey with Howard Johnson. You can bet if he is not playing the guitar or the 5-string banjo he is out somewhere playing (or watching) hockey.