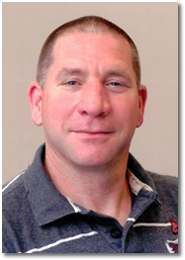 Steve Case was a strong, powerful runner whose physical stature resembled a football fullback. That strength and endurance allowed Steve to anchor our Men's Cross Country team during our historic domination of the OCAA Running Championships in the mid eighties. Steve won back to back individual OCAA Gold medals in 1985 and 1986 and subsequently led the Men's team to an OCAA Gold Medal in 1986. Steve was also named Team MVP in 1986 at the Athletic Banquet.