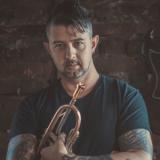 Troy Dowding is a freelance musician from Hamilton Ontario and is fast becoming one of the most in-demand trumpet players in the GTA. His life as a musician began when he started playing trumpet at 12 years old and in his own words, "I knew from the first day that I was going to be a professional trumpet player. Playing trumpet for some reason came naturally to me." The Hamilton native draws experience from drum and bugle corps, youth orchestra, jazz bands, musicals and playing on cruise ships.

Conqueror II Drum & Bugle Corps, Hamilton Philharmonic Youth Orchestra and the Hamilton Junior Jazz Band were Troy’s introduction and foundation to performing regularly as a trumpet player. After two years Troy joined the Hamilton All Star Jazz Band where he toured Europe twice performing at notable festivals such as the Montreux, Vienne Jazz Festival, Juan-les Pin, and Nice Jazz Festival among many others.

Troy had the fortune of being able to study with world-renowned trumpet players Gregory Bush, Chase Sanborn and Jason Logue. In 2000 he was awarded the International Association of Jazz Educators -Yamaha Brass Scholarship to attend any college or university in Canada. He chose Mohawk College in order to begin his studies with one of Canada's top trumpet players, Mike Malone.

After studying at Mohawk College for Music Performance, Troy then began working for Carnival Cruise Lines as a lead trumpet player in the show bands. This led Troy all over the world performing for and entertaining thousands of people every week for over six years. While working for Carnival, Troy had the fortune of playing with significant artists such as; Melinda Chapman, Jesse Lopez, Marcus Anthony, Jerome Dabney, Ned Rifken as well as long time members of the Stan Kenton Orchestra: Denny Brunk & Roger Homefield. With the experience Troy gained as a fulltime performer and now having played virtually every style of music, Troy returned home to begin his musical endeavors in the Greater Toronto Area and Hamilton Golden Horseshoe.

Troy maintains a very busy performance schedule and is a member of many sought after Toronto bands including; The St. Royals, Soular, All Request Live, ONQ Live, Sideone, Robbie Lane and the Disciples, Donny Yonder and My Son The Hurricane. As well as performing regularly Troy has recorded albums, music videos, arranged and performed with many top artists such as Andy Kim, Nikki Yanofski, Kayla Diamond, Liberty Silver, Elise Legrow, Dave Pomfret, Lori Nuic, and Lilly Frost to name a few.

While maintaining a full-time performance schedule Troy has been teaching privately for many years and is currently on the Music Faculty at Mohawk College.