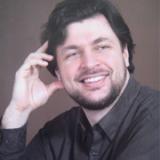 As a recitalist, Mr. Gulenco has appeared in Russia, France, the Netherlands, Belgium, Belarus, Latvia, Romania, Italy, Spain, Germany, the Republic of Georgia, Hungary, Moldova, Canada, and the United States. His performances have been broadcast on television and radio stations in Moldova, Russia, Hungary, Spain, the United States, Canada, and the Netherlands.

Alexei Gulenco began his piano studies at the Rachmaninov Music Lyceum in Chisinau, Moldova. He is a graduate of Moldavian Academy of Music, the Moscow State Conservatory where he studied with Valery Kastelsky, and the Royal Conservatory The Hague, with Naum Grubert as his mentor. In 2008, Mr. Gulenco obtained the degree of Doctor of Musical Arts at the University of Maryland at College Park under the guidance of Larissa Dedova.

Since 2008, Alexei resides in Hamilton, Ontario. In addition to performing, he is on faculty at McMaster University and Mohawk College.