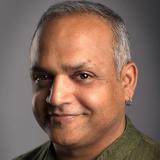 Atul's teaching career began when he helped establish Toonz Academy, which has 5 schools across India teaching some of the top people in the animation business. He later taught screenwriting at Humber College before joining Mohawk College full-time.

For three decades, Atul's expertise has been utilized to develop original and branded properties in the international markets, stationed in Los Angeles, Toronto, and India.

Atul has worked as a producer, writer and creative executive at companies like Nelvana to YTV to Fox Family Worldwide, Warner Brothers, Nickelodeon, Teletoon at Night, Marvel Animation and Toonz Entertainment.