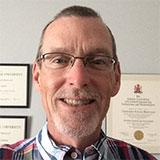 Chris Blackwood has an Honours BA in Geography and a BSc in Biology from McMaster University. He also holds a Dipl.T. in Transportation Engineering from Mohawk College. After postsecondary education, he worked for the Ministry of Transportation of Ontario. For four years at the Ministry, he monitored and analyzed traffic operations. He analyzed the province’s 400-series highways. These highways are in The Greater Toronto and Hamilton Area.

He began his teaching career at Mohawk College in 1989. He started with the Building and Construction Sciences Department. In 1998 he became the Associate Dean of the department. His responsibilities ranged from diploma programs, to apprenticeship training in the civil-architectural-construction areas. Chris retired from full-time duties in 2014 but continues to teach part-time. Personal interests include woodworking, masters rowing, and philately.