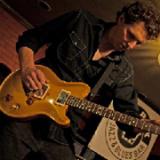 Guitarist Émile d'Eon is an in-demand session player and clinician. He is an honours graduate of Humber College's Jazz Diploma Program and was awarded Jazz Report Magazine's Post Secondary Musician of the Year in 2000.

Émile keeps a busy touring schedule and is on faculty at Humber College, Mohawk College and Centennial College in Ontario, Canada. He is also a guitarist for K. W Glee and Cyanide and Happiness.