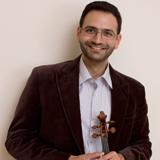 Originally from Mumbai, India, Jamshed Turel received his Bachelors and Masters of Music in violin performance, computer science and music theory from Indiana University, where he studied with Mauricio Fuks and Federico Agostini. At age thirteen he was the youngest player admitted to the Bombay Chamber Orchestra, and in 1994 he became the youngest concertmaster of the Bombay Players Orchestra. Pursuing his interest in orchestral playing, he later served as the concertmaster of the Terre Haute Symphony Orchestra, and Ensemble du Monde in New York City. He has subsequently been invited to guest lead orchestras in New York, Chicago, Houston, Dubai, Toronto, the Bahamas and London, as well as having performed as a soloist in several concerts across North America, Europe and Asia.

Jamshed’s performance experience has extended to musical theatre, where he has performed in the pit for several Broadway and touring productions, including Beauty and the Beast, South Pacific, Les Misérables and Phantom of the Opera. Combining his musical theatre experience and passion for working with youth, Jamshed currently serves as the music director for Burlington Student Theatre in Burlington, ON.

A versatile composer and arranger, Jamshed is the co-founder of ArtistWorld Publishing, and has worked extensively in the film, television and the video game industry. Among his credits include work on over 120 television episodes, 15 films and 2 video games for Disney, Cartoon Network, CBC, National Geographic and the National Film Board of Canada. As an orchestrator and music editor, his work with Campagn’Arts Media on the scores for the Radio-Canada hit show Providence were twice nominated for a Gemini Award for Best Music: Drama Series in 2009 and 2010.

With a keen interest in research and pedagogy, Jamshed has written numerous articles and has been awarded several private, provincial and federal grants from the Canadian government to research film music, music technology, and augmented & virtual reality in music teaching. In 2011, he was awarded the prestigious Saint-Georges Award of Distinction by the French government for his contributions in research and restoration of French music from the late 18th-century.

Currently Jamshed is the Coordinator of the Music Department at Mohawk College. He is an AVID Certified Pro Tools Instructor, and has won several awards for his teaching at McGill University and at Mohawk College, and is a multiple recipient of Hamilton’s Industry Music Award.