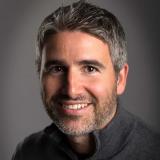 Some students refer to him (un-affectionately) as the "Dream Killer" because he often makes a habit of shooting down ideas. But that's only because Jef Petrossi wants Mohawk students to graduate with insanely high standards.

The perseverance has paid off. Jef's students have shown the ability to win regularly at all of Canada's major advertising student awards shows. This includes the ADCC, Applied Arts, and the Canadian Marketing Association. They've even represented internationally at the One Show.

Jef has also won a few teaching awards. Recently, he won Bronze as the National Canadian Professor of the Year.

Jef has worked as a Writer at LoweRMP, Grey Canada and DraftFCB. He's spent long nights working on clients such as Starbucks, Coors Light, TD Canada Trust, OLG, WSIB, and the Ontario Tourism Board.

His work has been featured in Marketing Magazine, Applied Arts, Archive Magazine, US Ad Review, AdAge, the National Advertising Awards and the New York Festivals.