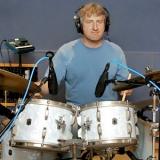 Kevin Dempsey has been a professional drummer for the past 25 years. He received his musical education from Mohawk College and York University and also furthered his studies at the Banff School of Fine Arts.

Following that, Kevin received a Canada Council ‘B‘ grant to continue studying in New York City under the tutelage of Marvin ‘Smitty‘ Smith, Joe Morello and Gene Jackson.

Since then Kevin has established himself in the Toronto Jazz scene and has performed and recorded with some of Canada’s best Jazz musicians. He was a founding member of the Dave McMurdo Jazz Orchestra, frequently performed with Peter Appleyard’s Quintet and big band, Paul Read’s Jazz Orchestra and is a featured performer with Guido Basso’s Jazz cruises.

Kevin has also performed with Bob Brookmeyer, Kenny Wheeler, Norma Winstone, Ranee Lee, Kevin Eubanks, Muhal Richard Abrams and Dave Holland. Kevin composes music and leads his own Quintet and can be also heard on numerous Jazz recordings frequently played on CJRT. Kevin has been on the faculties at Mohawk College and McMaster University for the past 25 years.