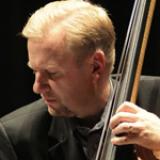 In January, 2005, Pat released his first CD as a leader, on Cornerstone Records, entitled "In the Moment" featuring some of Canada's premier jazz musicians, Mike Murley, Reg Schwager and Barry Elmes. The CD has received rave reviews, including "In the Moment is a CD that's very easy to like", (Richard Bourcier, JazzReview.com), and "This is a classy contribution to the jazz canon", (Geoff Chapman, Toronto Star). The Pat Collins Quartet was nominated for a 2005 National Jazz Award as "Acoustic Group of the Year", "Album of the Year" in 2006, and Pat was nominated as "Acoustic Bassist of the Year" in 2005 and 2006.

In May 2020, Pat released his second CD as a leader, also on Cornerstone Records. It's a trio recording featuring two of Canada's premier jazz musicians, Tom Szczesniak on accordion, and Reg Schwager on guitar. The album is entitled, "Time Well Spent" and features compositions by all members of the trio, as well as tunes by Paul Simon and Michel Legrand. "Time Well Spent" was named to Jazz FM91.1's Top 25 Jazz albums of 2020, as well as the Ottawa Citizen's list of Top 10 Jazz Albums of 2020. Heather Bambrick of Jazz FM described the album as "poignant and gorgeous".

Pat is on the full-time music faculty of Mohawk College, since 2005. Pat also taught for many years at Humber College in Toronto, as well as many summer music camps including the Interprovincial Music Camp, Kincardine Summer Music Festival, and the National Music Camp. Pat is currently on the faculty of the Prairielands Jazz Camp in Regina, Saskatchewan as well as the Jazz for Adults camp at Wilfred Laurier University in Waterloo, Ontario.

Pat is active as an adjudicator and clinician at music festivals across Canada, including Musicfest Canada, The Golden Horseshoe Musicfest, and the West Coast Jazz Festival.