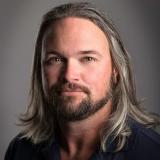 As a Mohawk College Alumnus, Ross started working in the broadcasting field immediately after graduating.

First being picked up by a production company in the Hamilton, Burlington area as a Set Assistant he quickly moved up the chain to the Head of Special Effects and Specialized Props. His next step was working for a company in Washington DC shooting and producing videos on the eastern cap of South Africa for corporate use.

Having only stayed in the USA for a year, he came home to work for the CBC in Toronto. At CBC, Ross worked as Video Specialist on various productions including Hockey Night in Canada, FIFA, Olympics, and many other studio productions.

Before coming to teach at Mohawk, he was the Technical Producer for CBC Toronto News. Ross is still very active in the industry working on productions such as NHL, NBA, MLS, FIFA, Olympics, UFC, MLB, CFL and many more.

Ross trains in the areas of Studio and Mobile operations here at Mohawk.