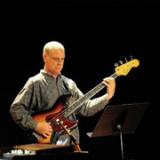 Toronto born Will Jarvis is a busy freelance bassist and educator who has been performing professionally since 1980. A graduate of the Humber College music program, Will has gained a reputation as a very versatile bassist and is equally comfortable playing jazz, rhythm & blues, funk and fusion as well as Brazilian and Cuban Music.

As an educator, Will has been teaching at the college and university level for over twenty years. Along with his duties at Mohawk College, Will is also currently on the music faculty at Humber College and York University in Toronto.