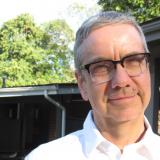 Jeff Goodes is a radio producer and host with over twenty years of experience with CBC Radio.

Currently, he works with White Coat Black Art, an award-winning nationally broadcast medical program on CBC Radio One. The show examines stories such as living with dementia, physician-assisted death, and PTSD among first responders. Jeff is also the voice of CBC Radio Overnight.

His documentary on  the bombing of Peterborough's only mosque received a Wilbur Award in 2016. His work with White Coat Black Art has received a Gabriel Award, Gracie Award and an Ontario Association of Midwives Media Award.

Jeff wrote and produced a 10-part radio series, Know Your Rights which explored Canada's Charter of Rights and Freedoms. For ten years, Jeff hosted Fresh Air, CBC Radio's Ontario weekend morning show which connects people from all walks of life with its mix of music, stories and interviews.

Outside the CBC, Jeff is an instructor at Mohawk College in Hamilton.

Jeff was executive producer of the Scott Free Podcast with Scott Thompson of Kids in the Hall. Scott and he also created Post Mortem, a promotional video series for Sony Television.

As a volunteer, he and his partner Erin work with The Longer Table which sponsored and helped to settle a Syrian refugee family in Hamilton. They are also the parents of two fabulous teenage children.