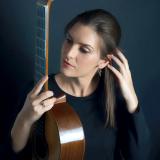 Jelica Mijanović is a Niagara based award winning, versatile musician with a rich performing career and years of experience as professor of guitar at universities and conservatories in Europe. Jelica is appointed as a guitar and ensemble teacher at Mohawk College, Hamilton, as of Fall 2021. She is fluent in six languages (English, French, Italian, German, Spanish and Serbian) and seeks to share her fascination and knowledge about different cultures through her repertoire, her teaching, and her publications.

Jelica left her native Montenegro at the age of sixteen to study at the University of Arts in Belgrade, Serbia. She later continued her studies in Switzerland and obtained a Bachelors degree in Music at the University of Applied Arts and Sciences of Western Switzerland at the young age of 19. Two years later she became the youngest student ever to obtain a Masters degree in Music Pedagogy from the same institution. She later obtained Masters degree in performance in Geneva, as well as Artist Diploma in Music Performance in both Strasbourg, France, and in Basel, Switzerland.

Jelica’s teachers have included such iconic figures in the guitar world as Dusan Bogdanovic, Stefan Schmidt, Susana Prieto and Oscar Ghiglia. She has taken masterclass with the renowned guitar and lute players such as Pepe Romero, Edin Karamazov, Zoran Dukic, to name just a few. She plays Arabic oud at an amateur level and has taken lessons in jazz and Indian sitar.

While teaching guitar at Switzerland’s most renowned music institutions, Jelica was participating in guitar competitions, playing concerts as a soloist and chamber musician, and attending festivals, at times as a participant, at times as a lecturer and jury member. Jelica has won 11 first and two second prizes at international guitar competitions such as Gredos San Diego (Madrid), Guitar Art (Belgrade), Incontri Chitaristici di Gargnagno (Brecia, Italy), and she won four first prizes at the National music competition of Montenegro. She received prizes in the two largest music competitions in Switzerland – Migros and the Swiss Association of Musicians, where she was competing against all categories of instrumentalists. Jelica has also received more than 20 scholarships from organizations including Hans Wilsdorf (Rolex), Rotary International, Italian Embassy in Montenegro, Yehudi Menuhin (Live Music Now), and the Montenegrin Ministry of Culture. She has been invited across Europe to more than 30 international festivals as a soloist, lecturer or jury member.

Jelica Mijanovic has taught at the Conservatoire Populaire de Musique, Dance et Theatre in Geneva (2013 to 2019), at the Conservatoire de Friburg (2013/14), and Konsi Bern (2014). She was an Associate Professor at the University of Applied Arts and Sciences of Western Switzerland HEMGE from 2016 to 2019.
Jelica is also active as a music editor and commissioner of new works. In 2012 she published The most beautiful classical pieces for young musicians – a collection of classical music masterpieces she transcribed for beginners, with financial support of the Montenegrin Ministry of Culture. In 2014 she invited composers from Iran, Australia, Canada, Germany, Turkey/Switzerland and Serbia/USA to write solo guitar pieces based on Montenegrin traditional music. She then prepared the resulting pieces, dedicated to and premiered by her,for publication as “Montenegro, Origin and Inspiration” (Musical Center of Montenegro, 2016).