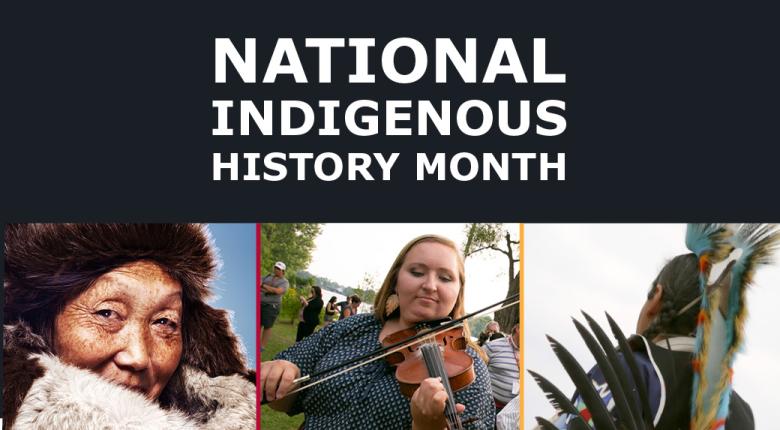 Throughout the month of June, Indigenous Student Services will be sharing daily facts and resources on social media, weekly film suggestions, and a virtual workshop for all students, faculty and staff.

Powwows bring many First Nations together across many communities during the summer months, and even within the winter months too. Powwows reinforce social bonds, spiritual beliefs, celebration and common cultural heritage. Dance competitions, special dance demonstrations, initiations, and feasts take place during a powwow.

Drum groups, where singers sit in a circle and sing using a big drum, are integral to the powwow. A host drum group leads, and other drum groups also participate, rotating songs for the dances. The drumbeat honours the heartbeat of our mothers. Songs are unique to each dance style and have been passed down for generations. Competitive and noncompetitive dances and songs are shared at powwows today. Honour songs show respect and are shared at a variety of events and ceremonies in addition to powwows.

Male categories include the following:

Female categories include the following:

What is the Métis Nation?

The Métis Nation is an Indigenous nation with its own history, culture, founding stories, languages, flag and lifeways, all of which originated in Western Canada. The Métis are one of three constitutionally recognized Aboriginal peoples in Canada. Much like other Canadians today, the Métis live all across Canada and elsewhere in the world. However, the majority of the Métis population lives largely within the Prairie provinces.

Metis cultures in Ontario. The Metis people in Ontario are historically based in the fur trade where First Nations women and European traders intermarried and whose “mixed-ancestry” descendants developed a unique identity and culture. Today, Metis people live in both urban and rural areas across the province. Michif is a Metis language spoken in Ontario.

Closer to home, Métis Nation of Ontario (MNO) was established through the will of Métis people and Métis communities coming together throughout Ontario to create a Métis-specific governance structure. Learn more about Metis Nations of Ontario.

Indigenous athletes in Canada have made incredible contributions to our country's legacy at the Olympic Games, both in summer and winter events.

In sports like ice hockey, skiing, snowboarding and curling, Indigenous athletes have been competing in winter sports at the Olympic level for over 80 years.

Read about some incredible Indigenous Olympians from Canada who rocked winter sports.

The Truth and Reconciliation Commission (TRC) provided those directly or indirectly affected by the legacy of the Indian Residential Schools system with an opportunity to share their stories and experiences.

Take time to review the Truth and Reconciliation Commission of Canada: 94 Calls to Action

An inspiring true story based on a group of Inuit students in the small Arctic town of Kugluktuk. Suffering from widespread drug use, alcohol abuse, domestic violence and one of the highest teen suicide rates in the world, this northern community is periled by the legacy of colonialism. The students are naturally skeptical when Russ Sheppard, yet another ignorant and unprepared white rookie teacher, arrives from the South on a one-year teaching contract. With much to learn, but deeply shaken by the death of one of his students, Russ introduces his class to the sport of lacrosse in an effort to help lift the dangerous fog of trauma existing in his students. While initially resistant, the students gradually come together to embrace the sport, form Team Grizzlies, and find inspiration to make shifts in their own lives. Together with Russ, the team gains the support of a deeply divided town and eventually negotiates its way to the National Lacrosse Championships in Toronto. Despite their ultimate defeat, The Grizzlies discover that success doesn't lie in the outcome of a lacrosse game; but instead, in the spirit of community.