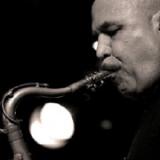 Michael Stuart was born in Jamaica, W.I. He attended the Jamaica School of Music for two years after graduating from High School. While enrolled there he studied Saxophone, music theory and Flute.

When Michael moved to Toronto, Canada, he enrolled at the Brodie School of Music where he studied Classical Saxophone. He also studied privately with Jazz Saxophonist Alvin Pall.

DownBeat Magazine said of Michael's playing; "....the music is strong and honest, ...." Michael's self-produced recording "Determination" was nominated for a Juno award (1979 Best Jazz Album of the Year ).

Between 1977 and 1978 Michael toured and recorded with the Great Elvin Jones. As a member of the JazzMachine he played in Germany, Sweden, France, Denmark, the U.S., Austria, and Italy as well as the Netherlands. Of "the Blessing", recorded in 1987, the Globe & Mail wrote: "....the music is often quite beautiful. Stuart is a compelling melodicist whose extended solos sing serenely as often as they wail." Coda magazine wrote: "Stuart is both passionate and mystical, ...."

In 1991 Michael toured the Soviet Union as a featured member of the Dave McMurdo Jazz Orchestra. A Jazz Special for Television, taped in Budapest, Hungary, followed in 1992. A tour of Germany in 1993. In 1994 Michael went to New York city to join the Franklin Kiermyer Quartet. In 1995 the group toured Canada and the United States. In 1995 the group recorded "Kairos" (Evidence) with Sam Rivers. At this time Michael also played at the Knitting Factory, Yoshi's and the Jazz Bakery among other famous clubs in the United States. Michael continued to record and work with the Kiermyer group up until 1999. Michael was awarded a Canada Council Grant in 2002 to study with Jerry Bergonzi. These studies took place from 2002 to the summer of 2003, and due to the huge body of work, will continue without end. In the Spring of 2004 Michael attended a Michael Brecker clinic held at Humber College. The clinic lasted three days. In the ‘80's Michael studied Piano briefly with Frank Falco. These studies are to resume shortly. Michael also studied eighteenth-century counterpoint with Nick Deutch in the early '90s. In the fall of 2004 Michael began studies on the Drums with Jim Blackley. Michael has been teaching for over ten years and continues to teach privately. In the Summer of 2006 Michael returned to Boston where he recorded with Jerry Bergonzi and Bruce Gertz.