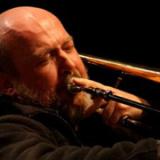 Rob Somerville has been performing for over 30 years. During this time Rob has backed many major artists such as Natalie Cole, Paul Anka, Nikki Yanofsky, The Temptations, The Four Tops, Frank Sinatra Jr. and Matt Dusk. Rob's support of jazz artists is also a formidable list, playing with such notables as Peter Appleyard, Pat LaBarbara, Kenny Wheeler, Gap Mangione, Tom Scott and Larry Carlton to name a few. Currently Rob is a member of The Juno Award winning John McLeod Jazz Orchestra, and The Writers Jazz Orchestra, (Formerly The Dave McMurdo Jazz Orchestra). Rob has also played in theatre orchestras for such shows as The Producers, Chicago, A Chorus Line, and Anything Goes. Rob is currently in his third season at the Shaw Festival.