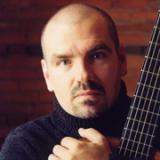 Timothy Phelan is a classical guitarist, conductor, composer, arranger and educator based in Niagara. He made his CBC recording debut at the age of eighteen as concerto soloist with the Quebec City Symphony Orchestra, and he has since been heard in solo, concerto and chamber music performances over CBC Radio and Television, Radio France, Radio Caribbean, and Cuban National Television and Radio. He has performed at four of the triennial Toronto international guitar festivals, at Leo Brouwer's festivals in Havana and Martinique, and he has given world-premiere performances of several chamber works, including Alan Hirsh’sDance Trio commissioned for Guitar ‘81 in Toronto. A highly versatile musician, Tim’s varied recent engagements include an appearance with the Niagara Symphony and Chorus Niagara (performing his own composition for guitar, 100-voice choir and symphony orchestra), a chamber music programme featuring many of his own arrangements of music by Villa-Lobos and Piazzolla, collaboration with the international award-winning Hamilton Children’s Choir, a feature solo concert at the Hamilton International Guitar Festival, and performances in Europe.

A graduate of The University of Toronto, Tim studied for a total of ten years with renowned guitar pedagogue Eli Kassner. He also studied with British guitarist John Mills, and was selected to participate in public masterclasses with many of the world’s leading concert guitarists. Tim, in turn, spent many years teaching classical guitar at Canada's premier guitar school, the Eli Kassner Guitar Academy of Toronto.

Tim is also an accomplished conductor who has collaborated in concerto performances with Canadian guitarist Liona Boyd. In addition to his orchestral and choral conducting, he served as Conductor of Guitar Ensemble at the University of Toronto, conducted performances (including a concerto conducted from the soloist's chair) at the Guitar '87 international festival, conducted the world-premiere of Douglas Jamieson's To A Carolan Air, and appeared in the CBC/Rhombus Media film Guitar. He currently directs the Mohawk College Guitar Ensemble.

As an arranger, Tim's output includes numerous works for solo guitar and for large guitar ensemble, in addition to more than one hundred arrangements for guitar in duo, trio and quartet combinations with flute, violin, cello, voice and other instruments. His arrangements for guitar and pipe organ have been performed in many cathedrals and churches throughout Ontario, and his guitar ensemble arrangements have been featured at several international guitar festivals.

Tim's work as a composer has focused primarily on increasing the repertoire for classical guitar with choir, collaborating extensively with Canadian choral conductor William Brown. He has received numerous choral commissions, and has worked with a wide range of choral ensembles, including Choralis Camerata, Chorus Niagara, the Niagara Vocal Ensemble, ORIANA Women's Choir of Toronto, the Toronto Orpheus Choir, and the Woodstock-Fanshawe Singers. He recently premiered his own new work for guitar, choir and symphony orchestra with Chorus Niagara and the Niagara Symphony conducted by Robert Cooper.

In addition to his solo recitals and formal concert performances with choir, orchestra and various chamber music ensembles, Tim’s guitar playing is heard in venues ranging from the cosmopolitan hotels of Toronto to the quaint inns and wineries of Niagara. He appears as a guest soloist at church services (where he also collaborates with choirs and organists), and is well acquainted with the recording studio as a freelance session guitarist. Most of these endeavours require amplification of the classical guitar, and Tim is highly regarded for his ability to create a very warm and natural amplified sound as the circumstances demand.

Tim also completed a degree in Education from the University of Western Ontario, and spent more than twenty years as a highly dedicated secondary school music educator, serving as Head of Arts at two secondary schools, and teaching band, orchestra, choir, guitar, musical theatre and digital music production. He has also served as an adjudicator for guitar competitions in Edmonton, Toronto and Niagara. In addition to his active performing schedule, Tim maintains a very busy private studio in his hometown of St. Catharines, and he holds faculty positions in the classical guitar departments at Brock University and Mohawk College.