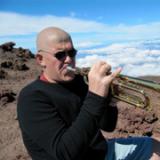 Trumpeter Jason Logue has grown to be one of Canada’s finest trumpeters and composers. He has performed or recorded with such artists as Sam Rivers, The Woody Herman Orchestra, Dave Brubek, Phil Nimmons, Dave Grusin, Louis Belson, Kenny Wheeler, Guido Basso, Jim McNeeley, Manteca and the Late Rob McConnell.

Most Recently Jason Has Recorded with Jazz Singers Emilie-Claire Barlow,

Jason has also performed in the Toronto productions of the musicals Dirty Dancing, Hairspray, The Last Empress, The Sound of Music, West Side Story, The Rat Pack, Ross Petty’s Cinderella, Jersey Boys, the Shaw Festival Productions of Mack & Mabel and Wonderful Town. As well, Jason has performed with the Toronto Symphony Orchestra and the National Arts Center Orchestra (Ottawa) as a guest 1st trumpet for many pops concerts.

Recently, Jason had the privilege of playing lead on the CTV recording of the original Hockey Theme with the brass section from the Toronto Symphony Orchestra as well as playing in the section with Dave Dunlop (Lead) and Steve McDade for the Recording of the NEW CBC Hockey Night in Canada Theme Song. What a Gas!

Jason is currently on the Faculty at Mohawk College in Hamilton, Ontario and the National Music Camp (opens new window) Jazz Division.