Mohawk’s EDI Action Plan is the result of a year-long process of research, consultation and collaboration between departments and individuals at all levels of the organization, but it is also a plan that builds on the college’s past successes. 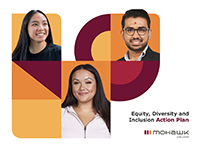 Making a stronger commitment to Equity, Diversity and Inclusion

A year of upheaval, uncertainty and change

Mohawk has always placed a high value on the principles of Equity, Diversity and Inclusion. The college took significant steps in 2015 to create a much stronger vision with the formation of the Welcoming Communities Task Force.

This Task Force, included membership from major regional employers and education partners including ArcelorMittal Dofasco, the Hamilton Police Service and McMaster University, among others. The group came together to share and discuss best practices and propose new solutions and partnerships that would make Hamilton, and Mohawk, a more welcoming community for newcomers.

Mohawk released the Welcoming Communities Task Force report in the spring of 2016. The report included 34 recommendations that were collectively aimed at:

In response to those recommendations, Mohawk developed a multi-year plan that involved many programs, activities and initiatives focused on improving the experience for international students. While many of the initiatives were completed, the process revealed that there was still more the college needed to do to create a more welcoming and inclusive environment for newcomers and every member of the campus community.

In response to the attacks on September 11, 2001, Mohawk created a Peace Park and Peace Pole, while at the same time launching an initiative called CARE, which was focused on promoting compassion, acceptance, respect and empathy. CARE was relaunched in 2007 with broader mandate that included diversity and outlined the need for “diversity space” on campus.

Making a stronger commitment to equity, diversity and inclusion

By early 2018, Mohawk had made progress on many fronts.

Under the leadership of the Director & Special Advisor for Equity and Inclusion, the college adopted five equity, diversity and inclusion commitments to encourage the college’s progress and strengthen its leadership position among other colleges and employers in the region and across the province.

These five commitments were developed through consultations with employees and students and are based on best practices from other employers who are seen as leaders in this field are intended to guide the college’s decisions on issues such as professional development and training, eliminating systemic racism and other forms of discrimination, addressing gender equity, advancing accessibility and attracting and retaining a diversity of talent or attracting and retaining talent reflective of our community. Since adopting these five commitments, the college has been contacted by several universities and colleges interested in using them to develop their own equity, diversity and inclusion commitments.

Mohawk established its first Human Rights Policy and Procedure in 1982.

In August 2019, Mohawk deepened its commitment to EDI by formally endorsing the Government of Canada’s Dimensions Charter, committing the college to the principles of equity, diversity and inclusion in all aspects of academic and research activity.

The Dimensions program was created to help postsecondary institutions address systemic barriers, particularly those experienced by members of under-represented or disadvantaged groups, including, but not limited to, women, Indigenous Peoples, persons with disabilities, members of visible minority/ racialized groups, and members of 2SLGBTQIA+ communities. Institutions that endorse the Dimensions Charter commit to embed equity, diversity and inclusive principles in their policies, practices, action plans and culture.

Mohawk also began to create awareness of the purpose and intent of its EDI commitments with employees in 2019. Departments were required to submit EDI-focused activities. Universal Design for Learning became mandatory for all course outlines and curriculum including training of new instructors in this regard. The college also began training programs to advance employee’s use and knowledge of how to create accessible spaces, communications and documents. As well, the college re-established the Accessibility for Ontarians with Disabilities Act (AODA) Steering Committee.

Later in 2019, the college adopted the Leadership Accord on Gender Diversity, developed by Electricity Human Resources Canada, a non-profit organization supporting the human resources needs of Canada’s electricity and renewable energy sector. By signing the accord, Mohawk committed to promoting the values of equity, diversity and inclusion and to ensuring women are informed about opportunities available to them, and are fully supported and provided with equal equitable opportunities to grow and develop to their full potential.

A year of upheaval, uncertainty and change

Then Canada, and the world, faced the COVID-19 pandemic.

COVID-19 became an all-hands on deck crisis that absorbed the college’s resources and put a significant strain on its systems and processes. While the college did not abandon its EDI priorities, it was forced to temporarily reprioritize, adjusting to a new set of circumstances that had no foreseeable end.

By the end of May 2020, the world had begun to adjust to life during a pandemic. Businesses re-opened and we slowly emerged from our first lockdown. Then on May 25, a video emerged of a black man named George Floyd who was killed while being taken into custody by police in Minneapolis, Minnesota.

George Floyd’s death shone a spotlight on the issue of Anti-Black Racism in America and around the world, including Canada. People of all races came together to speak out against Anti-Black Racism and the injustices that occur in all parts of our society, including academia.

For Mohawk, like many other institutions, the events of summer 2020 became a catalyst for change. Mohawk added its voice to the call for change by issuing a statement in support of Black Canadians who experience racism as a part of daily life. We then re-engaged with our community, many of whom were asking what the college was doing to make change happen.

In the weeks that followed, the Equity, Diversity and Inclusion Steering Committee was established and the delivery of EDI-focused training for employees was prioritized. We held a series a events for employees and students called Critical Conversations on Anti-Black Racism that encouraged discussion and deepened people’s understanding of the issue and the people impacted by it. The Critical Conversation events were expanded to include other topics such as awareness and action to end gender-based violence, anti-Asian racism, gender inequity and creating LGBTQIA+ inclusive environments.

By the year’s end, every department had submitted an EDI action plan that would become part of the first college-wide EDI Action Plan for 2021. The college also hired of a Manager of Workplace Equity and Inclusion to coordinate the college’s EDI efforts within the Human Resources department.

Mohawk has made significant progress towards achieving its EDI goals but there is still more that needs to be done to ensure there is equitable access and equitable opportunity for everyone in our community.

Our first college-wide action plan identifies specific actions that target each of the college’s five EDI commitments, including:

To oversee and support these and other efforts outlined in the Action Plan, the college has created the Office of Equity, Diversity and Inclusion. In addition to the implementation of the Action Plan, the office provides strategic leadership on all initiatives related to EDI and Human Rights. Supported by a grant from the Natural Sciences and Engineering Research Council of Canada, the Office of Equity, Diversity and Inclusion will coordinate the efforts of the task forces and assist with the demographic survey.