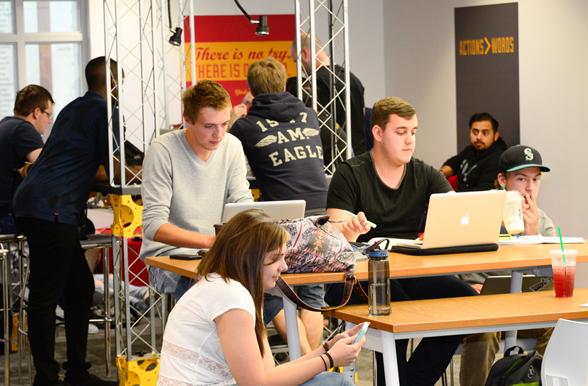 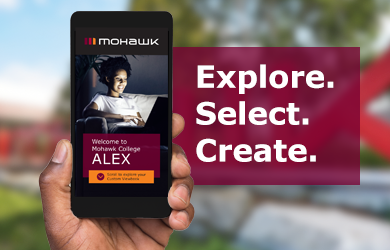 Join our email list to receive college and program updates, upcoming events and stories about our students!

On March 1st, 2016, I became an official employee of Bensimon Byrne. In that time, I've worked on a bit of everything. I mounted some things for the Liberal campaign, I created a logo for Mattamy Homes, I helped create some pitch decks for different clients, did some work on Scotiabank, and got to learn a lot about the kind of teamwork and effort that goes into getting all these things out, winning awards and new clients. Although I work a lot with InDesign and Illustrator, a big part of my work is also Powerpoint. I know it's not the most glamorous of programs, and at first I didn't think it would be something I ever did outside of school, but it wound up being a big asset for me. I'm one of few people in the Bensimon Byrne studio who work with it and who know its ins and outs, which means that I get a variety of clients to work on. As far as Mohawk goes, I credit the faculty and my classmates with a lot of my growth and development in this industry. They all fostered a great environment and I was happy to go to school early or stay late because of them. Though it wasn't always smiles and laughs, I really learned (and continue to learn) so much from the people I met through this program.

I started as an intern at Mindshape Creative Brand Marketing agency located in Oakville. The agency was rather small with approximately 12 people- therefore; it was an all hands on deck kind of situation. This is how you learn how to manage a client and exceed their expectations at a fast pace. I learned more from this small agency then I would in the big city by digging deep into brainstorm session right to final execution. After my internship was over I was offered a full time gig as an account coordinator. Over a year and half later I now have my own clients, as well as have the opportunity to work on some of our other great clients such as Ford, Mother Parkers, Kruger Products, Credit Union Central of Canada, CGC and more. Since I began working for Mindshape, we have grown immensely. We now employ more than 25 people and have ever-growing client relationships. So if you are looking for a big job in perhaps a little city - it's possible. The professors at Mohawk will be sure to help you find a job that is a right fit for you-they did for me!

I've worked in gas stations, call centres, and kitchens. I've woke up with knots in my stomach dreading a 12 hour shift at a factory. I've worked so many jobs in my lifetime you'd think I was the Highlander, and I've hated every single one of them. Today, I woke up excited to go into work. I love advertising. If you stick with it, work hard, and get extremely lucky, you might love it too.

Our professors were great because they offered new challenges every single day, but they also supported us however they could. We didn't have to send an email and wait a week to get a response. Instead, we could just walk into their office and have a chat. Because of Mohawk I got to travel to Boulder, Colorado (look it up, it's not a huge town) to internship at Crispin Porter + Bogusky. At the time, they were at the very top of the ad agency ladder. Over 4,000 people applied to get in there from all around the world, and somehow, I got accepted. Cool. After learning a lot there and having a great time, I came back to Toronto where I worked for Saatchi + Saatchi, Lowe Roche, TBWA, Juniper Park, and currently DS+P. It has been a crazy time. I think my favourite part about working in advertising is the fact that it really is something different every single day. There are many, many challenges - but that makes it fun.